Eastern Guruma’s new contract at Rio Tinto’s Silvergrass Mine will see the construction of a 2.8km all weather sealed road to enable light vehicle access to and from Jerriwah village to the Rio Tinto Site offices. The project scope also requires construction of an overland conveyor tunnel from precast concreate units within scheduled shutdown period to minimise disruption to mining activities.

The Eastern Guruma project team are progressing well with the Roadworks project with clearing and stripping of topsoil, foundation preparation for embankment construction, and extension of culverts and other drainage works being undertaken. The team have recently lifted the box culverts into position over the overland conveyor, which is a major milestone for the project and was achieved without incident in a safe and professional manner. 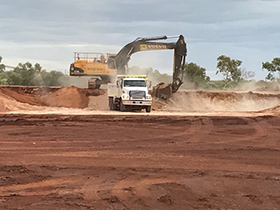 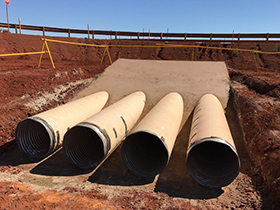 The Client has commended Eastern Guruma for the recent culvert installation works and acknowledged the team’s efforts within Rio Tinto’s organisation.

Congratulations to Eastern Guruma for their efforts on successfully installing 21 concrete box culverts to enable the new LV99 sealed road to pass over the existing the overland conveyor. This work was well planned, carried out safely and completed ahead of schedule. This work was one of the highest risk works on the SGE Project with culvert install over a live conveyor.

Thank you to efforts of the entire team for this critical piece of work. 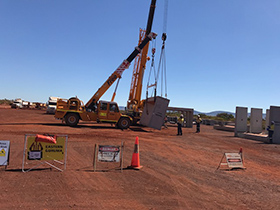 Rotating Culverts Prior to Installation 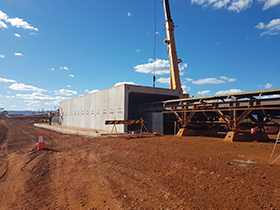 The Eastern Guruma team were also given early praise form the client for their discovery and reporting of a potential heritage site. At the commencement of the Silvergrass East Roadworks project, Eastern Guruma Operators Josh Nicholson and Angus (Gus) McGuire identified a potential heritage site on their routine site inspection. These team members followed procedures by stopping work, demarcated the site (a scar tree), and notified their supervisor and the Rio Tinto team of their discovery. 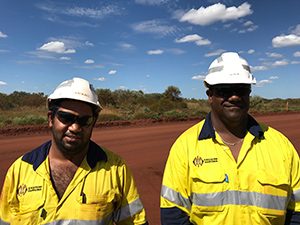 The entire Eastern Guruma team is looking forward to continuing works with Rio Tinto, and are eager to see their Silvergrass project thrive.