Eastern Guruma is a major sponsor of East Perth Women’s Football Club and the Kirby Bentley Cup, which both encourages and supports young Aboriginal girls to play football.

The East Perth Women’s Football Club kicked off this year’s season with a successful launch held on the 25th of March, at Medibank Stadium. Eastern Guruma was proud to introduce our league side, reserve and Rogers Cup teams which now makes a complete football pathway for all females wanting to play football.

The annual Kirby Bentley Cup was held on the 3rd of March 2017 at Lighting Park and was another success to see a huge turnout of young Aboriginal girls playing football. Congratulations to the East Perth Kirby Bentley team who came away with the win and was presented with a trophy. 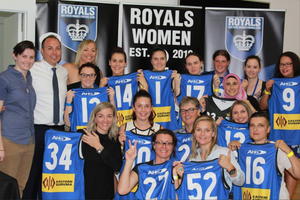 Eastern Guruma has been a longtime sponsor of the Wickham Men’s Darts Team, and is proud to have provided their team shirts.